The Finals for March  Trivia Madness XVI will be hosted by Blind Pig Tavern Westside (#2) in Athens, Georgia for the 1st time in the long history of this venerable event.

It is long overdue.

As of this posting there are 19 teams in the finals with only a remote chance of seeing any others join.

Defending champions ‘Much ado about Muffins‘ defend this year’s St. Patrick’s Cup – their 2nd, against a typically deep and ‘Experienced’ field.

5 time Champions Buckhead Rednecks, motivated by two consecutive near misses in the Finals and an error in the World Broadcast Premier, will be hard to beat as always as they fend off former champs #9, & Ray-Ray’s Par-Tay.

Will this be the year for Oedipus, United, Experience, Playboys, or Bobby Brown?

The coming week will be available to all teams to improve upon any scores in their cumulative tally, or to fill in any missing weeks. 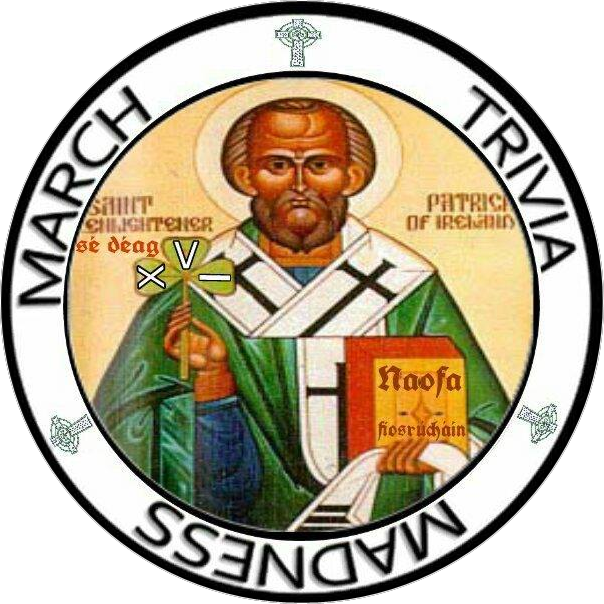 Here we go again children, another tournament season draws nigh. Oh the pageantry, history, traditions, outright audacity and gall of this event. It defies the English language’s halting attempts at describing it and must truly be Experienced.  And with that, it is with great humility and auspicious hope that I extend any reading this the opportunity to participate in the world’s greatest trivia tournament, March Trivia Madness XIV.

The rules for the uninitiated

March Trivia Madness is broken down into two parts, The Cumulative and Super Saturday.

First you must earn your invitation. To earn an invitation to play, you must finish in the top 3 of a FCT nightly show & be the highest non-qualified team that night. You will then have 1 week to pay the $100 entry fee. If you do not pay your fee by the time Question #1 flies the following week, your qualification bubble period will have busted and you will have to re-qualify. Please note, each year there are a couple of “auto-qualify” shows that take place. Show up, play the game, pay the fee, and you are in. Follow us at facebook.com/fullcontacttrivia to look for the dates of those shows. Beware: Time and time again we see teams not take advantage of an early qualification thinking they will be able to re-qualify again before time runs out only to not be able to. If you have the advantage of entering early DO IT!

Prizes will be given to the TOP 10 Teams of the Cumulative, the Best Schwag at the Finals, More Convenient Arrivals Times for the Finals, and more!

The Cumulative Championship is recognized as the 2nd most prestigious title in Full Contact Trivia, only bested by winning Super Saturday and becoming World Champion.

The Cumulative is 9 weeks long and requires each team to play at least once/week. Any score tallied at any FCT location will count. Your best single evening of any given week will be counted towards your cumulative. Performance Points are awarded for top three finishes:

Yes, this is slightly diminished from its previous 9, 6, 3

In years past these have accrued separately from your weekly total, but that rule has changed. You may now select just one evening to post, meaning a 4th place 95 on Tuesday followed by a 1st place 85 (+6=91) on Wednesday would post as a 95 assuming no further games were played.

Your scores will accumulate even if you haven’t yet earned your invitation. (ie. If you play weeks 1-3 and don’t qualify until week 4, your scores from weeks 1-3 will carry over). So don’t panic if you don’t qualify in week 1. And if your score isn’t where you want it to be, play another show that week. A tournament week this year begins on Sunday and Ends on Thursday. Your highest score is the one that counts. So if you do badly on a Sunday, take advantage of a show later in the week. Want to ensure a good score? Play early and often.

On Saturday, April 25th at 2:00pm at a venue to be determined, the holiest of all Full Contact Trivia Events will begin, the Finals of the 14th Annual March Trivia Madness.

The number of people allowed on your team is determined by the number of chairs you earned during the Cumulative.

You will receive a chair at the finals for each 100 cumulative points scored with the following modifiers:

– A reduction of 5 points/chair required for each Major Game played (ie; play a Major and you receive a chair for every 95 points scored. Play two and it goes to 90…)

– You will earn a chair for each Major game won

Any extra available chairs will be sold in our usual way – one at a time in order of cumulative finish. We’ll repeat in like manner until gone. That money will go to the McNuttski winner (the highest average tab per person on Super Saturday. So named in honor of the awe-inspiring consumption of the McNuttski team)

The Final Game will be the format that you’ve grown to love with a restaurant of more than 200 of your fellow FCT Triviaheads. It’s not just a trivia game, it’s an event. Prizes earned from the tournament season will be awarded at the time. Inductions into FCT’s Ancient and Mysterious Order of the Tassel will take place but more importantly…

One team will be crowned the Full Contact Trivia World Champions.

Kickoff begins with the Trivia Bowl on Friday February 13th.

Things to know for MTM XIII

*** Make sure you have RSVP’d on Facebook to either Full Contact Trivia, Triviaheads, or your local host.  Get that information to them pronto if you haven’t.

*** Absolutely no cell phones allowed inside the building.  Anything resembling a cell phone, a bar of soap, a block of wood that can fit into the palm of your hand – all of these things get you disqualified ON SIGHT.  This is our Super Bowl, people.  We won’t be in the mood for explanations.  Leave it in the car, or leave it with Bobby.

*** Get there on time (see below post for what that means), and read through the clipboard given to you.  There is vital – VITAL – information in it… Make sure to read up on duties for the Captain, Runner, Scribe, and Server Liason (or go over to FCT on facebook today and read it).

See you there, and good luck!

Bobby: When a restaurant gets 250 people all at once, very few people get decent service unless the joint is staffed with waitering & bartending ninjas like myself..

Unfortunately these are as rare as a Kerlin with connective brain tissue, so we have a system for helping …

We stagger arrival times for teams so that the restaurant can handle the load and everyone has a good experience.

Your arrival time is based on your order of finish in the cumulative.

IT IS IMPORTANT that your GROUP arrives at the prescribed time and is seated in whole and begins ordering so that by the time the next wave comes in, the food and beverages for your group are already handled.

DO NOT FLAUNT THIS ARRIVAL TIME. Respect the competition, your competitors, and the venue by adhering to this policy.

arriving early is fine, but you may have to order from the bar or wait until your server can get to you.

If you stick to your arrival time you’ll be fine.. Get in, get down, get ordered, and get after it…

Week 9 final, but we’re not done yet.  Due to various circumstances, we have make-up games to play.  Talk to your local host for specific details regarding what the make-up games mean, but here’s the schedule:

And because their scores are of importance and interest to many, here are base scores for United and Axis in each of those weeks:

Best of luck to both teams heading into the final few games.

Heading into the Sunday games, here’s where we sit.

Axis leads, but only because Bobby wouldn’t accept “Skip Putnam” as 1/3 of the Dark Triad, thereby costing United a win on Monday.  The answer is presently under review…

The cumulative is CLOSE heading into the final week.  United is still a heavy mathematical favorite (trust me on that one), but Axis is making things more interesting than we could have expected a week or two ago.

Write-up on Etta III to come (quick preview: all mortals bow down to Muffins), but for now, your scoreboard heading into the Sunday doubleheader: